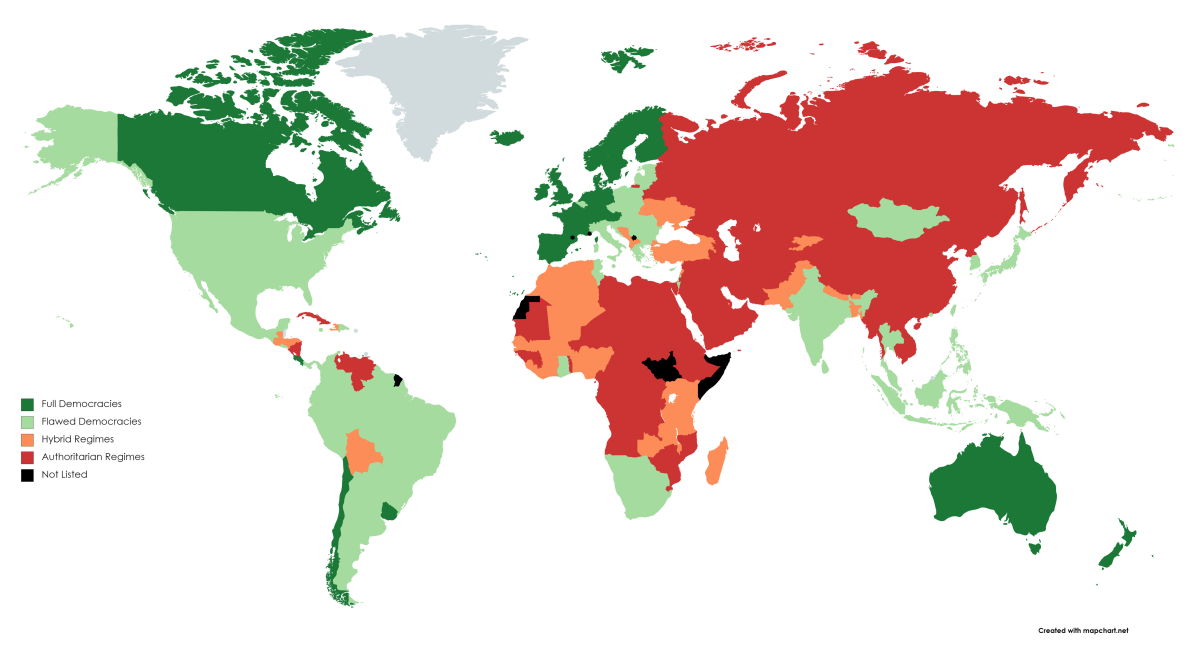 An old joke goes that Democracy is a terrible form of government … except it’s better than all the others!

Our world today is faced with conflict between democracy and dictatorship. On the one side is the free world, where leaders are chosen by some form of representation of large numbers of citizens and sometimes even a majority. On the other side is authoritarianism where a select few are selected by a select few to govern everyone else.

[I]t has been said that democracy is the worst form of Government except all those other forms that have been tried from time to time; but there is the broad feeling in our country that the people should rule, and that public opinion expressed by all constitutional means, should shape, guide, and control the actions of Ministers who are their servants and not their masters.

An argument in favor of democracy is freedom of choice for the largest segment of the population, plus the ability to remove leaders who fail to provide for the perceived welfare of the most citizens. This makes democracy adaptive, shifting with the times. It also makes leaders accountable for their actions and crimes. An argument in favor of authoritarianism is the myth of the benevolent dictator–someone who knows what’s best for the people even if the people don’t know it themselves.

But dictators are rarely benevolent, and as they become saturated with power, they are corrupted. The criminal massacres, perpetrated by Putin, of Ukrainian civilians is one of the strongest recent arguments against authoritarianism. A single man decides, on a whim, the life and death of thousands or maybe more. The invasion of Ukraine is so egregious and unwarranted, that we wonder how the Russian people can put up with their isolated and manic leader. Yet by some measure more than 60% of the people in Russia approve of the war.

How can the free world see the invasion as the atrocity it is, while Russia’s majority sees it as a just war? The answer is a surprising result of population dynamics known as the replicator-mutator equation. The challenge for us here in the free world is to learn how to game the replicator-mutator equation to break up the monopoly of popular opinion and make Putin pay for his arrogance. This blog explains how “mass hysteria” can arise from forces within a complex environment, and how to construct a possible antidote.

There are several simple models of population dynamics that try to explain the rise and fall of the number of individuals that belong to varying cohorts within the population. These models incorporate aspects of relative benefit of one group over another, plus the chance to change sides–defection. The dynamics under these conditions can be highly nonlinear and highly non-intuitive. One of the simplest of these models is known as the replicator-mutator model where replication follows the fitness of the cohort, and where individuals can defect to a “more fit” cohort.

The basic dynamics of the model are

where xa is the fraction of the population that is in cohort a, Wab is a transition probability, and φ is the average fitness of the full population. The transition matrix is given by

where fb is the fitness of cohort b and Qba is a stochastic matrix that allows for defection of an individual from one cohort to another. The fitness of a cohort is given by

where pbc is the pay-off matrix for the relative benefit of one cohort at the expense of another. Finally the average fitness is

The Einstein implicit summation convention is assumed in all of these equations, and the metric space in which the dynamics are embedded is “flat” so that there is no essential difference between superscripts and subscripts. There is also a conservation law that the sum over all population fractions equals unity.

In the language of population dynamics, this model has frequency-dependent fitness, with defection and pay-off, in a zero-sum game.

One of the simplest questions to answer with this model is how so many people can come to believe one thing. This is known as “opinion uniformity”.

This replicator-mutator model explains the property of opinion uniformity, as well as the opposite extreme of opinion diversity. The starting point for both is the pay-off matrix pbc which is assumed to be unity on the diagonal for b = c and to a constant factor a for b ~= c. This pay-off is symmetric so that all opinions are equally “believable”. The stochastic defection matrix is close to unity on the diagonal, and has random terms on the off-diagonal that are proportional to a constant ε. The defection matrix allows a person from one cohort to defect to the belief system of another cohort if they believe that the new cohort has more merit. Cohorts with greater merit (fitness) gain more members over time, while cohorts with lower merit have fewer members over time.

Note that the fitness increases with the number of members in the cohort. This is the bandwagon effect. A belief system is perceived to have more merit if there are more people who believe it. This clearly creates a positive feedback that would cause this cohort to grow. Even though all the cohorts have this same positive feedback, the zero-sum rule only allows one of the cohorts to grow to its maximum extent, taking members away from all the other cohorts. This is illustrated in Fig. 1. One belief system wins, taking almost the full population with it.

What allows the winner to take all is the positive feedback where the fitness of the cohort increases with the number of members, combined with the ability for that cohort to take members from other cohorts through the defection matrix.

However, all of the cohorts are trying the same thing, and the pay-off matrix is fully symmetric and equal for all cohorts, so no cohort is intrinsically “better” than another. This property opens the door to a strong alternative to opinion uniformity. In fact, as more members are allowed to defect, it creates a trend counter to winner-take-all, helping to equalize the cohorts. Suddenly, a bifurcation is passed when the winner-take-all converts discontinuously to a super-symmetric situation when all opinions are held by equal numbers of people. This is illustrated in Fig. 2 for a slightly higher defection rate ε = 0.03. The parameters are identical to those in Fig. 1, but the higher defection rate stabilizes the super-symmetric state of maximum diversity.

These two extreme results of the replicator-mutator equation, that switch suddenly from one to the other dependent on the defection rate, may seem to produce solutions neither of which are ideal for a healthy democracy. One the one hand, in the uniform case where the wining opinion is monolithic, everyone is a carbon-copy of everyone else, which is a form of cultural death (lack of diversity). But, on the other hand, one might argue that maximum opinion diversity is just as concerning, because no-one can agree on anything. If all opinions are equivalent, then everyone in the society believes something different and there is no common ground. But in the diversity case, at least there is no state-level control of the population. In the case of opinion uniformity, the wining opinion can be manipulated by propaganda.

A government can “seed” the belief networks with propaganda that favors the fitness of what they want their citizens to hear. Because of the positive feedback, any slight advantage of one opinion over others can allow that opinion to gain large numbers through the bandwagon effect. Of course, even stronger control that stifles dissent, for instance by shutting down the free press, makes it that much more likely that the state-controlled story is believed. This may be one reason for the 60% (as of the writing of this blog) support Putin’s war, despite the obvious lies that are being told. This is illustrated in Fig. 3 by boosting the payoff between two similar lies that the government wants its people to believe. These rise to take about 60% of the population. Members of the cohort are brain-washed, not by the government alone, but by all their neighbors who are parroting the same thing.

Breaking the Monopoly of Thought

How do we fight back? Not just against the Kremlin’s propaganda, but also against QANON and Trump’s Big Lie and the pernicious fallacy of nationalism? The answer is simple: diversity of thought! The sliver bullet in the replicator-mutator model is the defection matrix. The existence of a bifurcation means that a relatively small increase in the amount of diverse opinion, and the freedom to swap opinions, can lead to a major qualitative collapse of the monolithic thought, even when supported by government propaganda, as shown in Fig. 4. More people may still believe in the state-supported propaganda than the others, but it is no longer a majority.

The above models were all very homogeneous. It is more realistic that people are connected through small-world networks. In this case, there is much more diversity, as shown in Fig. 5, although the defection rate needs to be much higher to prevent a monolithic opinion from dominating. The state-supported propaganda is buried in the resulting mix of diverse ideas. Therefore, to counteract state control, people must feel free to hop about in their choice of beliefs and have access to other beliefs.

This is a bit paradoxical. On the one hand, the connectivity of the internet has fostered the rise of conspiracy theories and other odd-ball ideas. But sustained access to multiple sources of information is the best defense against all that crazy stuff winning out. In other words, not only do we have to put up with the lunatic fringe if we are to have full diversity of thought, but we need to encourage everyone to feel free to “shop around” for different ideas, even if some of them are crazy. Our free society shouldn’t be cancelling people who have divergent opinions, because that sets us down the path to authoritarianism. As a recent add said in the New York Times, “Cancel culture cancels culture.” Unfortunately, authoritarianism is on the rise around the world, and the US almost suffered that fate on Jan. 6, 2021. Furthermore, with Xi aligning with Putin and giving him the green light on Ukraine–cynically on the eve of the Olympic Games (of peace)–the new world order will revolve around that axis for decades to come, if the world survives that long. Diversity and freedom may be the only antidote.