“Modern physics” in the undergraduate physics curriculum has been monopolized, on the one hand, by quantum mechanics, nuclear physics, particle physics and astrophysics. “Classical mechanics”, on the other hand, has been monopolized by Lagrangians and Hamiltonians.  While these are all admittedly interesting, the topics of modern dynamics that monopolize the time and actions of most physics-degree holders, as they work in high-tech start-ups, established technology companies, or on Wall Street, are not to be found.  These are the topics of nonlinear dynamics, chaos theory, complex networks, finance, evolutionary dynamics and neural networks, among others. 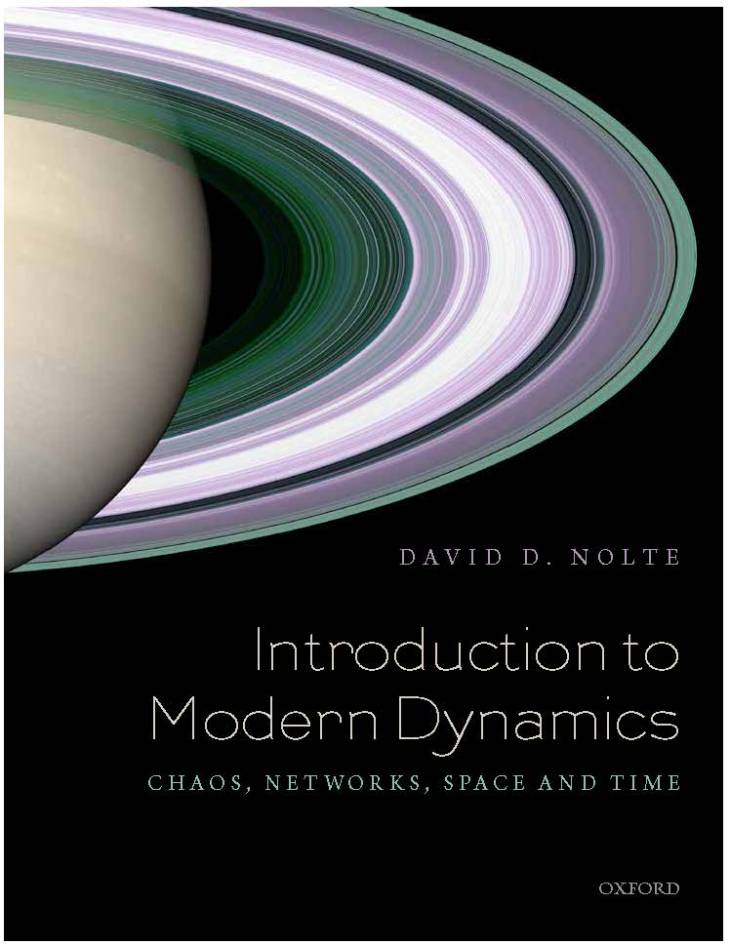 There is a growing awareness that the undergraduate physics curriculum needs to be reinvigorated to make a physics degree relevant to the modern workplace.  To that end, I am listing my top 10 topics of modern dynamics that can form the foundation of a revamped upper-division (junior level) mechanics course.  Virtually all of these topics were once reserved for graduate-student-level courses, but all can be introduced to undergraduates in simple and intuitive ways without the need for advanced math.

The key change in perspective for modern dynamics that differentiates it from classical dynamics is the emphasis on the set of all possible trajectories that fill a “space” rather than emphasizing single trajectories defined by given initial conditions.  Rather than study the motion of one rock thrown from a cliff top, modern dynamics studies an infinity of rocks thrown from every possible point and with every possible velocity.  The space that contains this infinity of trajectories is known as phase space (or more generally state space).  The equation of motion in state space becomes the dynamical flow, replacing Newton’s second law as the central mathematical structure of physics.  Modern dynamics studies the properties of phase space rather than the properties of single trajectories, and makes rigorous and unique conclusions about classes of possible motions.  This emphasis on classes of behavior is more general and more universal and more powerful, while also providing a fundamental “visual language” with which to describe the complex physics of complex systems.

The Cartesian coordinate plane that we were all taught in high school tends to dominate our thinking, biasing us towards linear flat geometries.  Yet most dynamics do not take place in such simple Cartesian spaces.  A case in point, virtually every real-world dynamics problem has constraints that confine the motion to a surface.  Furthermore, the number of degrees of freedom of a dynamical system usually exceed our common 3-space, expanding to hundreds or even to thousands of dimensions.  The surfaces of constraint are hypersurfaces of high dimensions (known as manifolds) and are almost certainly not flat hyperplanes. This daunting prospect of high-dimensional warped spaces can be surprisingly simplified through the concept of Bernhard Riemann’s “metric space”.  Understanding the geometry of a metric space can be as simple as applying Pythagoras’ Theorem to sets of coordinates.  For instance, the metric tensor can be taught and used without requiring students to know anything of tensor calculus.  At the same time, it provides a useful tool for understanding dynamical patterns in phase space as well as orbits around black holes.

Introductory physics classes emphasize the conservation of energy, linear momentum and angular momentum as if they are special cases.  Yet there is a grand structure that yields a universal set of conservation laws: integrable Hamiltonian systems.  An integrable system is one for which there are as many invariants of motion as there are degrees of freedom.  Amazingly, these conservation laws can all be captured by a single procedure known as (canonical) transformation to action-angle coordinates.  When expressed in action-angle form, these Hamiltonians take on extremely simple expressions.  They are also the starting point for the study of perturbations when small nonintegrable terms are added to the Hamiltonian.  As the perturbations grow, this provides one doorway to the emergence of chaos.

“Chaos theory” is the more popular title for what is generally called “nonlinear dynamics”.  Nonlinear dynamics takes place in state space when the dynamical flow equations have terms that algebraically are products of variables.  One important distinction between chaos theory and nonlinear dynamics is the occurrence of unpredictability that can emerge in the dynamics when the number of variables is equal to three or higher.  The equations, and the resulting dynamics, are still deterministic, but the trajectories are incredibly sensitive to initial conditions (SIC).  In addition, the dynamical trajectories can relax to a submanifold of the original state space known as a strange attractor that typically is a fractal structure.

One of the central paradigms of nonlinear dynamics is the autonomous oscillator.  Unlike the harmonic oscillator that eventually decays due to friction, autonomous oscillators are steady-state oscillators that convert steady energy input into oscillatory behavior.  A prime example is the pendulum clock that converts the steady weight of a hanging mass into a sustained oscillation.  When two autonomous oscillators (that normally oscillator at slightly different frequencies) are coupled weakly together, they can synchronize to the same frequency.   This effect was discovered by Christiaan Huygens when he observed two pendulum clocks hanging next to each other on a wall synchronize the swings of their pendula.  Synchronization is a central paradigm in modern dynamics for several reasons.  First, it demonstrates the emergence of order when a collective behavior emerges from a collection of individual systems (this phenomenon of emergence is one of the fundamental principles of complex system science).  Second, synchronized systems include such critical systems as the beating heart and the thinking brain.  Third, synchronization becomes a useful tool to explore coupled systems that have a large number of linked subsystems, as in networks of nodes.

Networks have become one of the driving forces of our modern interconnected society.  The structure of networks, the dynamics of nodes in networks, and the dynamic growth of networks are all coming into focus as we live our lives in multiple interconnected webs.  Dynamics on networks include problems like diffusion and the spread of infection and connect with topics of percolation theory and critical phenomenon.  Nonlinear dynamics on networks provide key opportunities and examples to study complex interacting systems.

Perhaps the most enigmatic network is the network of neurons in the brain.  The emergence of intelligence and of sentience is one of the greatest scientific questions.  At a much simpler level, the nonlinear dynamics of small numbers of neurons display the properties of autonomous oscillators and synchronization, while larger sets of neurons become interconnected into dynamic networks.  The dynamics of neurons and of neural networks is a  key topic in modern dynamics.  Not only can the physics of the networks be studied, but neural networks become tools for studying other complex systems.

The emergence of life and the evolution of species stands as another of the greatest scientific questions of our day.  Although this topic traditionally is studied by the biological sciences (and mathematical biology), physics has a surprising lot to say on the topic.  The dynamics of evolution can be captured in the same types of nonlinear flows that live in state space.  For instance, population dynamics can be described as a large ensemble of interacting individuals that are born, flourish and die dependent on their environment and on their complicated interactions with other members in their ecosystem.  These types of problems have state spaces of extremely high dimension far beyond what we can visualize.  Yet the emergence of structure and of patterns from the complex dynamics helps to reduce the complexity, as do conceptual metaphors like evolutionary fitness landscapes.

A non-negligible fraction of both undergraduate and graduate physics degree holders end up on Wall Street or in related industries.  This is partly because physicists are numerically fluent while also possessing sound intuition.  Therefore, economic dynamics is a potentially valuable addition to the modern dynamics curriculum and easily expressed using the concepts of dynamical flows and state space.  Both microeconomics (business competition, business cycles) and macroeconomics (investment and savings, liquidity and money, inflation, unemployment) can be described and analyzed using mathematical flows that are the central toolkit of modern dynamics.

Special relativity is a common topic in the current upper-division physics curriculum, while general relativity is viewed as too difficult to expose undergraduates to.  This is mostly an artificial division, because Einstein’s “happiest thought” occurred when he realized that an observer in free fall is in a force-free (inertial) frame.  The equivalence principle, that states that a frame in uniform acceleration is indistinguishable from a stationary frame in a uniform gravitational field, opens a wide door that connects special relativity to general relativity.  In an undergraduate course on modern dynamics, the metric tensor (described above) is introduced in simple terms, providing the foundation to develop Minkowski spacetime, and the next natural extension is to warped spacetime—all at the simple level of linear algebra combined with partial differentiation.  General relativity ties in many of the principles of the modern dynamics curriculum (dynamical flows, state space, metric space, invariants, nonlinear dynamics), and the students can simulate orbits around black holes with ease.  I have been teaching General Relativity to undergraduates for over ten years now, and it is a highlight of the course.

For further reading and more details, these top 10 topics of modern dynamics are defined and explored in the undergraduate physics textbook “Introduction to Modern Dynamics: Chaos, Networks, Space and Time” published by Oxford University Press (Second Edition: 2019).  This textbook is designed for use in a two-semester junior-level mechanics course.  It introduces the topics of modern dynamics, while still presenting traditional materials that the students need for their physics GREs.